Remembering the Father of Erythropoietin

Biochemist Eugene Goldwasser, who had the drive and tenacity to spend more than 20 years isolating the first minute amounts of human erythropoietin, died at 88 last Friday, December 17. After Dr. Goldwasser and his lab staff isolated a few milligrams of the protein in 1977, he  eventually decided to collaborate with Amgen and in 1980 allowed them to start using some of his precious isolate to hunt for the gene. Amgen cloned the gene in 1985, and then began marketing the gene product as Epogen in 1989. 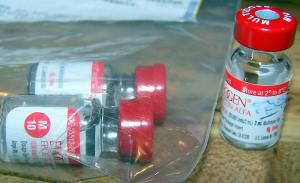 One of his colleagues at the University of Chicago, Dr. Donald Steiner, called Dr. Goldwasser’s isolation of erythropoietin a medical landmark similar in importance to the discovery of insulin. Although erythropoietin has gone through rocky times recently, with evidence of adverse effects curbing its use and dropping sales, the various marketed forms of  erythropoietin continued this year to tally billions of dollars in sales and substantial clinical benefits in patients with anemia.

I first learned of Dr. Goldwasser’s death in an obituary I read this morning, and subsequently I found several other pieces about him on the web. These include obits from the University of Chicago, The Chicago Tribune, The New York Times, and journalist Merrill Goozner, who wrote about Dr. Goldwasser’s work in a 2004 book on drug development. Also, a  remembrance by Dr. John Henning Schumann, a Chicago colleague and friend. Taken together, they sketch a committed, multi-faceted man motivated by a scientific challenge and a desire to help advance medical care.

For me, two nuggets from the write-ups standout. First is the vignette of of Dr. Goldwasser meeting a Japanese researcher in the lobby of Chicago’s Palmer House Hotel in 1975 to accept a modestly-sized box that inside held the dried concentrate of 2,550 liters of urine collected from patients with aplastic anemia. Over the next couple of years, Dr. Goldwasser and his associates purified from this gift a few milligrams of human erythropoietin, the first isolation of the human protein and a key step on the path toward cloning the gene and large-scale production.

Second is the poignant story of how both the University of Chicago and Dr. Goldwasser failed to patent erythropoietin, allowing Amgen to become the owner of this very valuable franchise. The University’s omission sounds like an oversight, but for Dr. Goldwasser it was a conscious decision to sidestep the fortune he could have claimed.

“Gene never profited from his discovery, the way that scientists and inventors now clamor to patent everything in sight,” wrote his friend Dr. Schumann. “He believed that his discovery should be shared with the public; after all, the government had funded his research career–he figured the taxpayers ought to get the benefit of his discovery.”

It was an act that recalls a more innocent era in biomedical research. Filing for patents “was not generally done at the time,” said his University of Chicago colleague, Dr. Gary Toback, who added, “He was someone who took enormous delight in doing science.” Soon after Dr. Goldwasser’s death his son said: “He was first and foremost a scientist and he was gratified that he was able to make such a great contribution.” For a person like that, the thrill of having his 20+ year quest fulfilled and seeing the subsequent impact erythropoietin had on clinical practice must have been payback enough.