Poll: Most Want the Mandate Nixed. Do You?

As the Supreme Court prepares to take on challenges to the Affordable Care Act, new data suggests that Americans remain divided on the constitutionality of the law’s requirement that all Americans purchase health insurance. Little more than half of Americans (54%) think the individual mandate should be ruled unconstitutional and that the Supreme Court will likely agree (55%), according to a recent poll by the Kaiser Family Foundation. The poll was based on telephone interviews with 1,206 adults in the United States from. Jan 12-17.

The poll also found that more than half (59%) of Americans think the Supreme Court Justices will base their ruling on their own opinions.  That sentiment is being echoed by the conservative interest group Freedom Watch, which recently filed its second petition to request Justice Elena Kagan to recuse herself. Supporters of the petition take issue with Justice Kagan’s former position as Solicitor General and close adviser to President Obama while the law was being written.

If the mandate were ruled unconstitutional, it’s not clear if the rest of the law would remain solvent. According to the poll, 55% of American thought remaining provisions of the law would survive but 30% said it would mean the end of the law entirely. 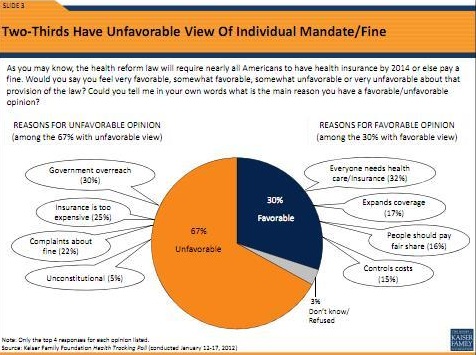 Further, the Kaiser poll shows that Americans are split on their own opinions of the ACA. According to the poll, 44% are against the law, 37% support the law, and 19% are unsure.

However, a majority (67%) oppose the mandate because it forced American to do something they don’t want to do (30%) or because health insurance is unaffordable (25%). An additional 22% just don’t like the idea of paying a fine for not having insurance.

Those who do support the mandate (30%) said it guarantees that everyone needs health coverage (32%) and that the mandate can guarantee that (17%). Some also said the mandate could control costs (15%).

Do you agree with these findings? Tell us more.