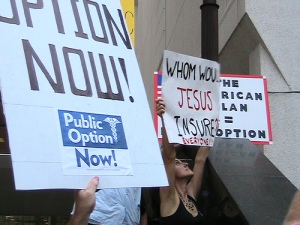 Most of the health reform talk this summer has centered on how the Obama administration is implementing the new law or how its passage will affect lawmakers in the mid-terms elections. But last week, some Democrats in the House changed the conversation, bringing back a debate about the creation of a government-run health plan or “public option.” Rep. Pete Stark (D.-Calif.) led a group of House Democrats in introducing legislation (H.R. 5808) to establish a public health insurance plan to compete alongside private insurers in the Health Insurance Exchanges that will be created under the Affordable Care Act.

Rep. Stark said the public option is needed to create competition. He cited some recent double-digit premium increases by health plans and the plans’ big profits. Democrats who signed on to support the bill also touted the public option as a way to cut the deficit. The Congressional Budget Office analyzed the legislation and concluded that it would save about $68 billion from 2014 through 2020 and that the premiums charged by the public plan would be 5% to 7% lower than those charged by private plans in the exchange.

But will the legislation gain any political traction? It’s certainly an uphill battle. The mid-term elections are only a few months away and many Democrats are vulnerable this year. That means there’s not likely to be a lot of substantive lawmaking happening between now and the end of the year. And when the new Congress returns in January, there may be fewer Democrats left to support adding the public option to the health reform law.

Hear more about the public option bill, comparative effectiveness research, and the next steps in health reform implementation in this week’s edition of the Policy & Practice Podcast.

For months, opponents of the Democrats’ health reform plans have railed against “ObamaCare.”  Well, President Obama has finally put his own stamp on health care reform.

Just this morning he released details about the plan he favors going forward. So what does ObamaCare look like? It turns out it’s a lot like the Senate version of health care reform, passed back in December.

President Obama’s plan has a health insurance exchange, but no public plan. It has an individual insurance mandate, but no strict mandate for employers to provide coverage. Like the Senate bill, President Obama requires employees to contribute to the cost of providing coverage if their employees are receiving some type of federal subsidy for their coverage.

There are some changes though. President Obama would increase the threshold for taxing so-called Cadillac health plans from $23,000 in the Senate bill to $27,500. And that tax wouldn’t kick in until 2018. The President’s version of health reform also includes more insurance protections for consumers and gives the Health and Human Services department more oversight of the health insurance industry.

Given that the administration has spent the last few weeks complaining about insurance company rate hikes, these provisions shouldn’t come as a surprise.

Finally, the President’s plan borrows a few ideas from Republicans. The President hasn’t ceded any major policy turf to the GOP here, he simply included some of their ideas on curbing waste, fraud, and abuse.

The plan is the first time the President has definitively staked out his position on health care reform. Now this plan will serve as the starting point for the bipartisan health care summit scheduled for Feb. 25. Stay tuned for more developments out of that meeting.

The health reform battle slogged on last week, with new proposals emerging to break the stalemate: allowing reimportation of drugs from other countries, and ditching the public option in favor of expanding Medicare to include people aged 55-64. Meanwhile, physicians were left wondering whether Congress was going to act to stave off an impending 21% cut in Medicare reimbursement for doctors.

It’s all in the Policy & Practice podcast. Give a listen and let us know what you think.

From press conferences, interviews, and more around Washington, D.C.

Physicians have a lot riding on what happens in Congress this year. After months of wrangling over health reform, House Speaker Nancy Pelosi (D., Calif.) will try to get her version of the health overhaul bill through the chamber. The bill includes a public plan whose rates would be negotiated with physicians.

But that’s not the only legislative priority of great importance to doctors this year. Unless Congress steps in, doctors will face a 21% Medicare pay cut in 2010 and more cuts in the years to come. A bill that would have scrapped the widely criticized Medicare pay formula failed to gain traction in the Senate, but House Democrats are trying to keep the fix alive with their own bill.

Get all the details in the latest installment of the Policy & Practice podcast.

From hearings and press conferences in Washington, D.C.

The Senate Finance Committee is expected to vote on its health reform bill this week. Once out of the committee, there will be more merging, amending, and negotiating. And it’s anyone’s guess what will make it into a final package. In this week’s Policy & Practice Podcast, our reporters take a look at what didn’t make it into the Finance Committee’s bill, namely the public option.

And it’s the public option that has filmmaker Michael Moore riled up. Mr. Moore came to Washington last week to promote his latest movie and took time out to threaten congressional Democrats. His message: Include a robust public plan or pay the price at the polls next year.

Take a listen to the podcast and share your thoughts.

After a long summer of waiting, journalists, policy wonks, and the public can finally start poring over the details of the Senate Finance Committee’s version of health reform legislation. But the work is really just beginning for the committee’s chairman, Sen. Max Baucus (D.-Mont.), who this week will have to manage debate on more than 500 amendments to his bill while also attempting to win GOP support and keeping his own caucus together.

Find out what’s in this draft bill, what business leaders think of reform efforts, and why physicians are still pushing for medical liability reform in this week’s installment of the Policy & Practice Podcast.

Because You Just Can’t Get Enough About Health Reform

From press conferences, briefings, and hearings in Washington, D.C.

Today’s installment covers the President’s visit to the AMA, primary care wants and woes, and early action from the Senate Health, Education, Labor, and Pensions Committee. Take a listen and stay up to date on health reform.

P.S. Check back later this week for previous installments of the Policy & Practice Podcast. We’ve done a few and are now able to post them.