Hopes, ideas, and hundreds of apps, are floating in the hallways during the third annual mHealth Summit, marking the beginnings of a field that is still in its infancy and carries with it more questions than answers.

“As our phones get more powerful, they are becoming our primary tools for doing everything from getting directions to deciding where to eat, Ms. Sebelius said during her keynote speech on Monday.  “And increasingly, that includes using our phones to track, manage, and improve our health.  In the iTunes store alone, there are nearly 12,000 different apps related to health – a number that will probably have gone up by the time I finish speaking.”

New apps and programs are also being introduced throughout dozens of presentations. And the Exhibit Hall is bustling with booths and posters about different national and global apps and programs addressing a wide range of health issues, from diabetes to mental health to medication adherence and weight loss. But many questions remain: What iss the role of regulatory agencies like the FDA and FCC? What’s the role of the physicians? And what does the future hold?

Joseph A. Cafazzo, Ph.D., the lead for the Centre for Global eHealth Innovation and an assistant professor at the University of Toronto provided some interesting answers, which you can watch — and comment on — below.

Is Your Phone Smart Enough to Cure Acne?

The Federal Trade Commission (FTC) says no, definitely not.  On Sept. 8, the agency announced that it had reached settlements with two companies that were claiming that their apps could cure acne. It is the first time the FTC has pursued any company making a health claim for an app.

“AcneApp” and “Acne Pwner” both claimed to be able to treat acne with colored lights that come out of the phone when the app is activated. Purchasers were told to hold the screen next to the affected area of skin for few minutes daily.

The agency was having none of it. “Smartphones make our lives easier in countless ways, but unfortunately when it comes to curing acne, there’s no app for that,” said FTC Chairman Jon Leibowitz, in a statement. 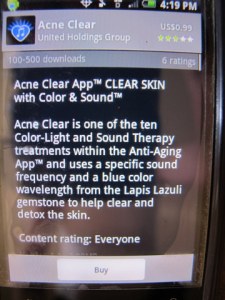 According to the FTC, there were 3,300 downloads of AcnePwner, for sale in the Android Marketplace for 99 cents. AcneApp was downloaded 11,600 times from the iTunes store at a cost of $1.99 each.

The AcneApp makers claimed that the app was developed by a dermatologist and that its technology was backed up by a study in the British Journal of Dermatology. Nope, not true, said the FTC.

The trade journal mobihealthnews reported that both apps had been removed from retail earlier this year or late last year.  Mobihealthnews also noted that the New York Times gave the AcneApp some press in late 2009. Gregory Pearson is identified in that story as a Houston-area dermatologist.

Apps that claim to offer curative powers were the subject of a two-day workshop that the Food and Drug Administration just wrapped up.  The agency has been mulling over how and when to regulate mobile apps.  It looks like the FTC may have beaten it to the punch.

But there are likely to be plenty more apps to scrutinize in the future.

A quick check of the Android marketplace today from my smartphone found, “Acne Clear,” from United Holdings Group, being sold at 99 cents.  It supposedly “uses a specific sound frequency and a blue color wavelength from the Lapis Lazuli gemstone to help clear and detox the skin.”  United also markets a “Skin Cleanser” app that supposedly uses a sound frequency and “a yellow color wavelength from the Imperial Topaz gemstone to help clean the skin of dark spots, sun spots, and acne scars.”  It’s 99 cents.

There’s also “SkinApp” from M&R Selected, which is free. and advises that it allows you to do “color light therapy on the go.” It is listed as having 10,000 to 50,000 downloads. The reviews are full of testimonials that it works, but also that it is just plain “bad.”

What kind of review would you give these apps? Should patients download them, or are they better off keeping their 99 cents?

Get Granny a Smartphone

From the annual meeting of the American Geriatrics Society, Orlando

iFall is a new Smartphone application in development to detect and warn others when an elderly patient falls.

The technology recognizes a phone’s fall and impact. If the phone does not move after impact, it automatically rings, vibrates and flashes. If there is still no response (and the alert is not manually canceled), a call is automatically placed to friends, family, or even next-door neighbors using Google Voice.

If a friend or family member determines it’s a true emergency, the iFall system turns on the speakerphone and calls 911 using multiparty mode. 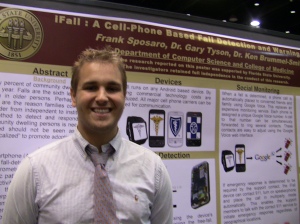 The system is less expensive than a medical monitoring device and works through existing cell phone plans, said Frank Sposaro of the Computer Science Department at Florida State University (FSU). FSU is developing the technology to  run on any Android-based device.

The system worked well in the laboratory, Mr. Sposaro said at his poster. Volunteer testing using wrestlers at the university is underway. A prototype for researchers is expected out at the end of summer 2010.