The Medicine Cabinet of Dr. Caligari

In the 1920 horror film “The Cabinet of Dr. Caligari,” the mysterious Dr. Caligari arrives at a carnival with a cabinet whose contents ultimately cause mayhem, madness, and murder.

In our modern-day editorial offices, a series of display cabinets has suddenly arrived in a side corridor—cases whose colorful contents once had much the same effects as the cinematic Dr. Caligari’s cabinet. 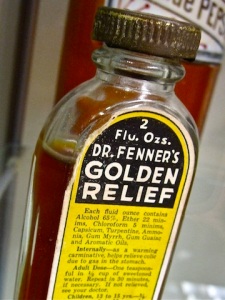 The mysterious cabinets contain antique bottles of medicinal magic, including these pre-modern marvels:

These historical artifacts actually belong to our corporate cousins who cover the pharmaceutical industry. But on some level, they belong to us all, a bottled legacy of medicine’s sometimes perilous evolution.

The medicine cabinets offer a rare glimpse back into the Valley of the Shadow of Death and Snake Oil. They’re reminders that we haven’t been climbing the mountain of medicinal progress as long as we might think.

In a time when a routine case of acute otitis media practically autogenerates an amoxicillin script, it’s easy to forget that many of our parents lived their childhoods in the deep shadows of a pre-antibiotic Dark Age. It’s hard to remember that the politically disparaged words “government regulation” once weren’t even in the pharmaceutical vocabulary, with painful results for millions. It wasn’t so long ago that our well-meaning physician ancestors chipped away at disease with the pharmaceutical equivalent of stone tools.

At best, those cabinets’ antique contents did little for their users. At worst, they were products from the closing moments of a millennia-long medical era that spawned the phrase “The cure is worse than the disease.”

Medical practice and the drugs upon which it relies have escaped their Dark Ages. From the antibiotic I’m giving my AOM-afflicted 7-year-old to the antiretroviral revolution in HIV treatment, scientifically tested and government-approved pharmaceuticals have helped create a world of health and longevity inconceivable a century ago.

Certainly, its snake-oil ancestors’ mortal sins don’t excuse the shortcomings of today’s pharmaceutical industry. Or those of the industry’s sometimes fallible regulators. But while we work ourselves into a righteous dudgeon over the influence of pharmaceutical industry funding or clinical trial obfuscation, or point fingers over imperfections in federal government oversight, we might want to take a moment to look back down the medicinal trail.

And remember how far we’ve come from the madness of those Caligari-esque medicine cabinets.

The steady, sometimes hyperbolic rise in American obesity continued through last year, according to new CDC data out last week on the body mass index numbers self-reported on the phone by more than 400,000 randomly-selected Americans.  In 2009, 27% of American adults were obese, up by 7% from 2000, a relative rise by a third in less than a decade. In nine states obesity prevalence rates stand at 30% or more, up from only three states as recently as 2007.

This makes for a worrying trend not only for the unremitting upward path, but because so few agents safely treat obesity. The weight-loss field is littered with agents cast aside over decades because of safety problems. At the International Congress on Obesity, which  I covered in Stockholm last month, European obesity specialists bemoaned that their only remaining prescription option was orlistat, a drug of limited efficacy, after European regulators pulled sibutramine last January. In what was likely exaggeration, a Melbourne obesity expert told me there that if he wasn’t able to prescribe sibutramine (still available in Australia, the United States, and several other counties) he’d close his weight-loss clinic.

It turned out that Melbourne physician Dr. Joseph Proietto reported that with rapid weight loss, based on completely swapping liquid meals for real food for three months, 59 of 60 people lost their goal of 15% of baseline weight, much better than what slower loss achieved. The keys to rapid loss are quick results, which aids motivation, and ketogenesis, which blunts hunger.The only problem is that patients can’t stay on a ketogenic diet indefinitely, and once they stop making ketones their appetite returns and weight creeps up unless appetite is curbed long-term by treatment. The world needs appetite-suppresion treatments that are safe, effective, and can used indefinitely, Dr. Proietto told me. It also suggests that drugs should mostly be tested for weight maintenance at a newly low level rather than as the means for losing weight.

Safety has been the tripping point, from amphetamines through fen-phen and on to rimonabant and sibutramine. Last month a new candidate, a combination of phentermine and topiramate, Qnexa , got voted down as unsafe by a FDA advisory panel. At the Obesity Congress another combination of two old drugs, naltrexone and bupropion, Contrave, showed troubling evidence that it may acutely raise blood pressure and in the long-term blunt the blood pressure benefit from weight loss. On the positive side, two other drugs in development, lorcaserin and liraglutide, show efficacy and safety so far, with lorcaserin scheduled for review by the FDA’s advisory panel next month.

Spending a few days among obesity specialists at a place like the International Congress on Obesity it becomes clear that in addition to the checkered history of obesity drugs the field is haunted by a past where snake-oil salesmen stand beside serious clinicians. And patients can have mixed motivations for weight loss that go beyond just their health.  Unlike treatments for other, immediately life-threatening disorders, where a modest adverse effect profile is tolerated, weight-loss drugs must meet a safety bar set higher that takes into account the overall impact of treatment on the bad consequences of obesity, such as cardiovascular disease.